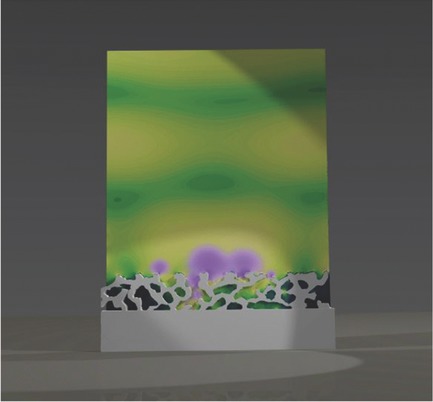 Subwavelength engineered materials, or metamaterials, designed to control the electromagnetic field are highly influenced by microelectronic circuit design, which manifests in the systematic assembly of well‐defined and understood elements in periodic arrays. In this communication, we explore a different approach, which takes inspiration from random network architectures. Complex networks arising in many different fields such as computer science (internet and the world wide web), biology (genes regulation, metabolic networks, food chains, neural networks), power transmission (large scale electric grids), social interactions (citation patterns) are all extremely robust and failure tolerant. In the internet and other complex networks, the removal of one or more nodes does not diminish the capability of the system to transmit and process information. Such robustness originates from the fact that the response of these systems is typically collective, driven by the functional connectivity among the network units. It is quite easy to understand that when the network size becomes sufficiently large, the overall system becomes extremely stable and robust.

An intriguing question concerns the possibility of adopting these ideas as design principles for a new class of network metamaterials. At variance with classical metamaterials based on a geometric pattern design, a network metamaterial lacks unit cells and encompass randomly connected elements through a network of links. The response of the material (e.g., the reflectivity or transmissivity) depends on the interactions among the elements of the network, and is tailored by controlling its connectivity. In this design approach, the elements of the network are not required to possess sophisticated electromagnetic behavior, because the response of the material is achieved through the interactions among the network units. Randomness has the advantage of being easily realized on large scales with minimal effort, and the interplay with light waves already reported a series of fascinating dynamics, ranging from energy harvesting, to lasing and beyond. The main question is to find a process where the connectivity among disordered units can be tailored and controlled. We here use metallic nanowire networks fabricated by dealloying, a wet‐chemistry technique. These systems appear similar to porous materials, but with the unique difference that the short‐range order, i.e., the network connectivity, can be here controlled in a deterministic fashion.