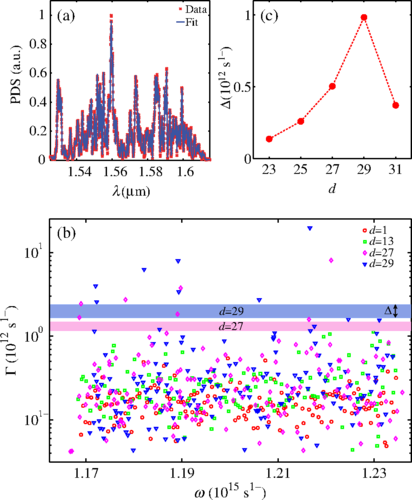 Superradiance—a cooperative phenomenon originally predicted by Dicke in 1954 for two-level atoms—consists of ubiquitous collective dynamics. Such an effect has been observed in a huge number of systems, both quantum and classical. Despite a large body of theoretical results, however, many questions about superradiance are still debated; this lack of experimental evidence originates, in part, from the difficulties in replicating the original setup investigated by Dicke. We introduce an engineered chaotic optical cavity with controllable losses that mimics the dynamics of a quantum system, and we conduct a detailed study of superradiant states. We modulate the cavity losses and investigate both how superradiance is dynamically approached and the universal hallmarks of this effect.

Our experimental setup takes advantage of the technology of two-dimensional photonics crystals, which makes it possible to fabricate microsized, transparent cavities with no absorption losses and completely controllable properties. When light enters a chaotic resonator, it bounces against the resonator walls in a random fashion and excites cavity resonances. When the cavity losses are sufficiently small, the cavity resonances do not interact. Above a specific loss threshold, however, resonances cooperate and superradiant states are formed, with the system entering into a new self-organized phase. We use experimental results, analytical predictions, and numerical modeling to demonstrate that multiple superradiant states are generated. We employ random-matrix theory to determine the nonlinear dynamics of the Dicke transition. The statistics of these states follows a universal distribution, which was numerically observed by Celardo and collaborators in 2011.

Our results can be used as a novel test for the occurrence of superradiance in physical systems as diverse as plasmas, semiconductors, Bose-Einstein condensates, and quantum dots.